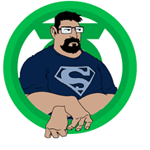 Eric Shonborn is one creepy basement shy of being a stereotypical comic book geek. He has embraced the geekiest parts of his personality and remains unapologetic for it. He has an art blog located at shonborn.net, and co-hosts a weekly podcast where he reviews movies and comic books at guttertrash.net. If for any reason you needed to contact him, you can email him here.

Joe Grunenwald is an accomplished DC Universe fan fiction writer from Dayton, OH. When not writing stories with other people’s characters and not getting paid for it, he enjoys reading comics, watching cartoons, playing with toys, and other activities that are normally associated with 10-year-olds. He is also an avid bowler. You can ask him how he puts so much wicked spin on the ball by emailing him here.

League Night came about because Eric wanted to re-watch every episode of Bruce Timm’s Justice League cartoons. However, that just seemed decadent and lazy, so he asked Joe G. if he’d like to help turn that endeavor into a podcast. It helped that Eric already has all the equipment necessary to do such a thing, that Joe is one of the funniest people Eric knows, and is a huge DC Comics fan. It also helped that Joe said yes.

When League Night came to an end, Joe and Eric wanted to continue podcasting, but didn’t really know what direction to go. The “League Night” name was a good name, but didn’t really fit for anything non-Justice League related. So then, like a flash of lightning, the name The View Masters hit Eric. It allowed Joe and Eric to pretty much watch and review anything they wanted. And so that’s the story of how a niche podcast broadened their scope in the most minimal way possible.

The View Masters: Watching TV and talking about it. Kinda.