Twin Peaks Episode 3: Zen, or the Skill to Catch a Killer 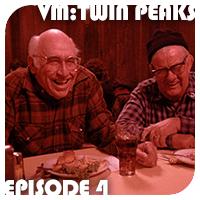 Cooper tries to deduce the meaning behind his strange dream the night before. Later, at the funeral of Laura Palmer, emotions explode over her grave. Sheriff Truman reveals to Cooper the existence of the secret society known as the Bookhouse Boys, and the society’s mission against the evil in the woods of Twin Peaks.

Comments have been disabled.